In May 2011, I attended my first Science Communication Conference, organised by the British Science Association. This annual two-day conference addresses the key issues facing science communicators in the UK and brings together people involved in public engagement. 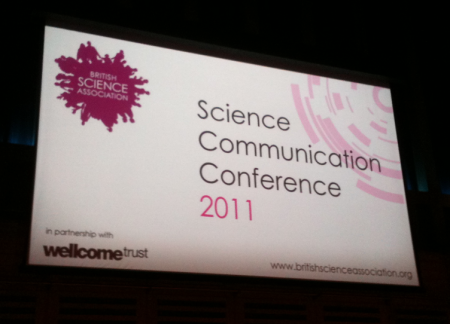 This year’s theme was online engagement: exploring innovative uses of online media to engage the public with science, including discussions about social media, podcasting, gaming, virtual worlds and citizen science, including a public engagement activity close to my heart (I’m a Scientist, Get me out of here!). The speakers included Simon Singh discussing libel reform, Tim Radford on his career and experience as former science editor of the Guardian, as well as a panel session with Robert Winston and Kathy Sykes discussing their perspectives on the future of public engagement.

I was lucky enough to receive a bursary from the British Science Association to attend the conference; in return I was asked to write a report of the first day’s Libel Reform and Science session (I’ve added extra links and fixed some of my sloppy typos from the published report):

A Libel Reform and Science session at the 2011 Science Communication Conference? How do the English libel laws affect scientists across the world? Just ask Dr Simon Singh, who’s two-year battle with the British Chiropractic Association (BCA) cost him upwards of £500,000 when they sued for libel regarding an article he wrote in the Guardian in April 2008. Increasingly, individuals and companies are using England’s outdated libel laws to suppress legitimate scientific debate and discovery.

Simon Singh hosted this session with Sile Lane, who coordinates the Keep Libel Laws out of Science campaign led by Sense About Science (a charitable trust that equips people to make sense of scientific and medical claims in public discussion). Simon first presented an overview of libel and the key issues: defamation, protecting reputations, privacy, free speech (including “reckless” free speech, as well as the impact of the Human Rights Act 1988), plus the distinction between slander and libel: it is also possible to get sued for spoken material that is recorded live, such as a radio interview or conference talk. This is obviously an important issue for scientists and researchers. The law as it stands is very much in favour of the claimant: you do not currently need to show proof of damage; in essence there is a reverse burden of proof, you are guilty until you can prove you are correct (innocent!). Furthermore, it is horrendously expensive to defend yourself; in the majority of cases, people tend to settle early because of the prohibitive cost of going to trial. This has created the “chilling effect” of libel: many people are now scared of invoking a libel threat, providing an undesirable form of editorial control.

Simon also clarified that a company or organisation has the right to reputation and can sue to protect it (a primary example being his case with the BCA), which pits the significant resources of organisations against individuals. Legal Aid is theoretically possible for libel cases, but in practice appears hard to access. He cited the now-famous “McLibel” case, a lawsuit filed by the McDonald’s Corporation against two environmental activists over a pamphlet critical of the company. The case lasted ten years, making it the longest-running libel case in English history, and was only a partial libel victory for the “The McLibel Two” (although they later won damages against the UK government in the European Court of Human Rights).

Sile Lane then introduced the Keep Libel Laws out of Science campaign (as part of the wider Libel Reform campaign), which is working with English PEN and Index on Censorship to push libel reform in the UK. More than 60 societies and organisations are members, including scientific bodies, professional institutions, journals and lobby groups. Libel reform became an election issue at the 2010 UK general elections, with all major parties making manifesto pledges. She highlighted some key libel cases: Dr Ben Goldacre‘s three articles [1,2,3] in the Guardian regarding Matthias Rath‘s promotion of vitamin pills for the treatment of AIDS (nearly two years, overall cost £175,000); Professor David Colquhoun, a pharmacologist at UCL who was threatened by herbal and Chinese medicine practitioners due to a blog post; Dr Peter Wilmshurst, a consultant cardiologist who is in the fifth year of being sued by a medical devices company over remarks he made on BBC Radio 4’s Today programme (even though the company have since gone into administration); to the absurd: the parenting community website Mumsnet has had to pull down discussion posts about a certain childcare company due to threats of libel. At this stage, an interesting point of order was raised by a barrister in the audience: you need to be careful with using the terms innocent and guilty, as it is not a criminal case. They continued by agreeing that libel reform is important, but some of the problems discussed are wider problems with the entire English legal system.

Simon then gave an abbreviated history of his case with the BCA (more detailed history), highlighting some of the key issues. The case hinged on the following phrase in his article: “The BCA happily promote bogus therapies…“; did bogus mean deliberately fake? Did happily mean willingly? To Simon, it meant incompetent and dishonest: he cited claims by chiropractors of treating colic, asthma and other chronic illnesses with no scientific evidence to back up these claims. During the preliminary hearing, it appeared that an opinion ruling was easier to defend that a justification of fact or scientific evidence; when Simon’s statement was ruled to be a statement of fact and required Simon to prove dishonesty by the BCA, he seriously considered giving up the case. When the case finally went to appeal (at the third attempt, two years after the article was originally published), they finally agreed with Simon’s defence — it was the opinion of the three judges that if you are criticising a conclusion in a science article, it should be assumed it is a matter of opinion. Unfortunately, this decision was not binding and has yet to be tested, as the existing case law is still fuzzy. While this was a victory for Simon, he lost over a year of his life and financially it was a disaster.

So why is this relevant to all of us? Essentially we have now all become publishers, with this being especially worrying for bloggers. What do you do if you receive a threatening letter? Sense About Science provide an advice guide, but you should always obtain legal advice in the first instance. Due to the prohibitive cost of libel actions (anywhere from £200,000 to £1m) and the difficulty of obtaining Legal Aid, it is sad state of affairs that withdrawing the article from the public domain may be the easiest thing to do.

Simon finished the session by summarising the latest libel reform work with the draft Defamation Bill that was published in March 2011. We need new libel laws, but the balance has to be fair, serving both journalists and the general public. We must ask why the cost of defending a libel case in England is 140 times the European average and why 90% of cases are won by the claimant. The draft Bill is a good start, but needs to go further; there needs to be a stronger public interest defence (especially beyond investigative journalism, to cover blogging, etc), as well as a notion of “substantial and serious” — if you write something that is in the public interest and you are careful but make a genuine mistake, you should not have to receive the ultimate punishment. Libel tourism is an increasingly problem, with individuals and organisations with little apparent ties to the UK using this jurisdiction to silence their critics. The changing mode of publication in the digital age also needs to be considered: as it stands, every single download or viewing of a web article refreshes the one year defamation window. Furthermore, from a scientist’s perspective, it is important that peer reviewed research should come under qualified privilege. We should all be concerned about the libel laws and Simon and Sile finished the session by urging us to feedback during the Bill’s scrutiny period, as well as supporting the Libel Reform campaign and signing the national petition.

The full conference report for the 2011 Science Communication Conference is now available online, as well as a number of the presentations and supplementary resources, including relevant background reading. I attended the following sessions over the two days:

There were a number of active online discussions on the #SCC2011 hashtag over the two days, as well as the conference Twitter account (@SciCommConf): see the Storify for Day 1 and Day 2, as well as this tag cloud (with thanks to @clivebgs):

A big thank you to the British Science Association for providing me with a bursary; I look forward to next year’s event (get involved Allan Pacey!).