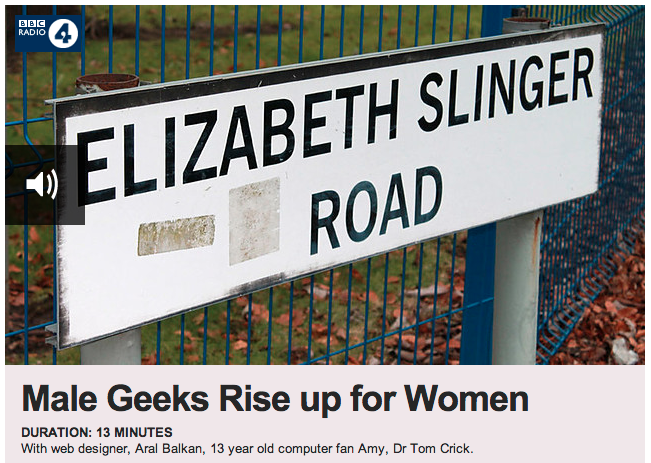 At present, only 30% of computing jobs are filled by women and when it comes to the number of female speakers at computer conferences, the figure is much, much smaller. In an attempt to address this problem, men are now signing an online pledge to boycott conferences where there are no women on the panel. But just how effective can this tactic be? Should men be doing more to get women and girls into computing? And does the problem really lie with conference organisers or in the fact that just not enough girls are taking computer studies at school? Jenni talks to Aral Balkan, a web designer, who has signed the pledge, to 13 year old Amy who loves computer programming and to Dr Tom Crick, Chair of Computing At School in Wales.

On Friday, I was a guest on BBC Radio 4’s Woman’s Hour, discussing females in IT, along with Aral Balkan and 13 year old Amy Mathers. As you can see above from the somewhat incongruous screenshot, the original focus of the programme had been on “male geeks rising up for women” (something with which I was not particularly comfortable), but I felt I had been invited on to discuss the educational aspects of the problem. As I’m sure you’ll agree, Amy was the stand-out star of the show, displaying an impressive understanding of computer science and the value of learning how to program.

Unfortunately, there has been an orchestrated social media backlash due to the choice of two male guests, which got picked up by the Daily Telegraph and the Daily Mail the following day. Without wanting to add to the furore, there appears to have been a lot of noise made with very little fact-checking, detracting from the focus on the underlying problem; I suggest you read Aral’s excellent blog post, as well as the response from the editor of Woman’s Hour.