US telecoms research firm TeleGeography has published its annual Submarine Cable Map, giving an excellent overview of international connectivity. Over 99% of international communications are delivered by undersea cables; while satellites are used for broadcasting, and are useful for rural communities and very remote places, satellite capacity is limited and expensive.

As you can see below, there is significant connectivity between the major hubs of the world, for both resilience and performance: different paths are used to avoid undersea fault zones, to land in different countries and to avoid certain countries. We have wired the ends of the Earth, almost; what’s left are generally remote island communities. In Europe, the US and Asia, people don’t have to think about what happens if the Internet goes down and they can’t send an important email. 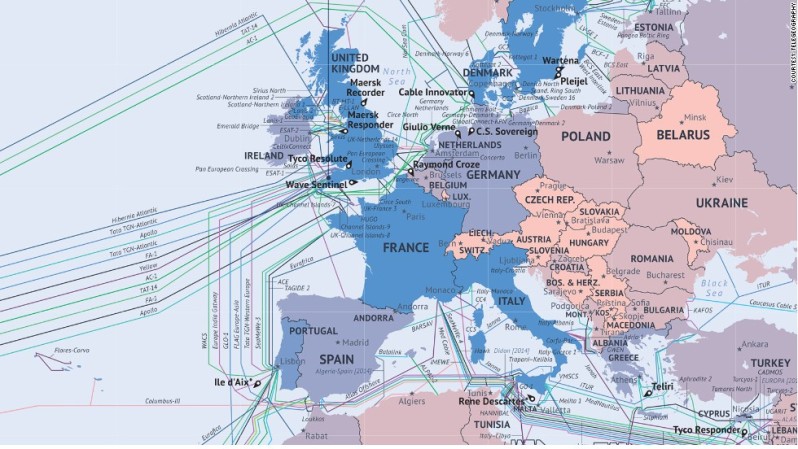 Undersea cables are actually more vulnerable than you might think; during the 2011 tsunami in Japan about half of their cables had outages, but the operators were able to reroute capacity to other routes. Last spring, there was damage in Mediterranean cables that linked East Africa to Europe, but it has been many years since there was a complete blackout.

Looking at previous versions of the map (see 2013 and 2012), you can see the developments: in the past year, numerous cables were built to the east coast of Africa, where it was previously all satellite; a new cable linking the US with Mexico and other Latin American countries should be ready this year; another connecting India and Malaysia; with one recently announced connecting the UK and Japan set for the first quarter of 2016.

From a UK backbone perspective, take a look at JANET (which celebrates its 30th birthday today!) and the JANET6 network infrastructure, as well as how it connects into GÉANT, the pan-European research and education network.